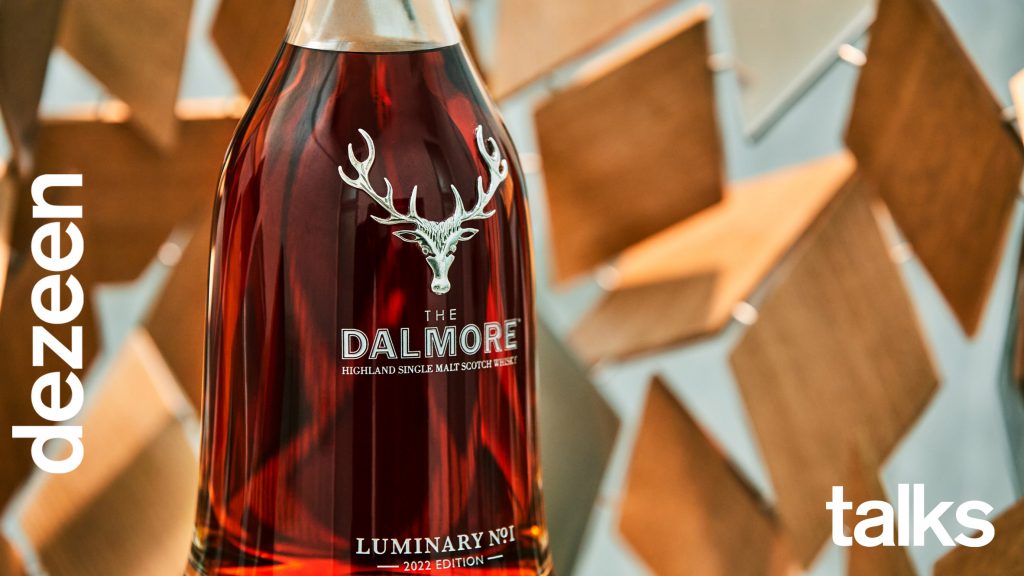 On this speak filmed by Dezeen at V&A Dundee for The Dalmore, Japanese architect Kengo Kuma explains how making a whisky with the Scottish distillery led him to search out an affinity between structure and whisky.

Throughout the speak, which was moderated by Yoko Choy, China editor for Wallpaper*, Kuma described the similarities between the 2 professions.

“Whisky may be very a lot associated with nature itself,” stated the architect. “I imagine structure is similar. And thru this collaboration, I realized many issues about whisky. It is a very thrilling course of.”

Kuma appeared on the panel alongside architect Maurizio Mucciola, with whom he designed V&A Dundee, and whisky makers Richard Paterson and Gregg Glass.

The occasion marked the launch of a partnership between V&A Dundee and The Dalmore known as The Luminary Sequence, which pairs notable architects with whisky makers to provide restricted editions housed in specifically designed bottles. Kuma and Mucciola are the primary individuals within the sequence.

Kuma labored with Paterson to develop a uncommon version of The Dalmore’s 48-year-old single malt whisky restricted to a run of solely three bottles, every housed in a singular wooden and metal sculpture designed by the Japanese architect.

One bottle is at the moment up for public sale at Sotheby’s, whereas the opposite two have gone to the V&A Dundee’s assortment and The Dalmore’s archives.

Mucciola and Glass teamed as much as create a extra accessible collectible version of The Dalmore’s 15-year-old single malt, of which 15,000 can be found.

Throughout the speak, the panel mentioned how the practices of structure and whisky distilling complement each other, in addition to the significance of cross-cultural collaborations.

Paterson highlighted the importance of wooden in each professions, emphasising its centrality to whisky manufacturing.

“After we speak about wooden within the whisky trade, it accounts for one thing like 80 per cent of what will provide the type, the consistency, however extra importantly, that additional degree of luxurious,” he stated.

The barrels used to create the 2 whiskies mixed each Japanese and Scottish oak to create a flavour that represented the cultural backgrounds of the collaborators.

“Wooden is clearly one thing that’s is essential for Kuma San’s structure,” stated Mucciola, who labored at Kengo Kuma and Associates earlier than happening to arrange PiM.studio Architects in London.

“Wooden can be clearly crucial for whisky making, the wooden and the composition of the casks,” he continued. “It is what makes the the style of the whisky, makes it particular. So we wished to create one thing very particular, which displays this philosophy.”

Throughout the speak, the panel additionally emphasised how the collaboration represented a continuation of a practice of cultural trade between Japan and Scotland.

“Via the expertise of designing V&A Dundee I realized the significance of trade,” stated Kuma.

“Some trade between completely different cultures provides me inspiration for the following mission,” he continued. “It is a form of trade – it is a collaboration with The Dalmore, nevertheless it’s an trade.”

“Scotland and Japan have a historical past of trade,” he stated. “Charles Rennie Waterproof coat is an efficient instance of this trade. He did not go to Japan, however he realized many issues from Japan.”

Mucciola went on to explain how cross-cultural experiences can enrich a designer’s observe.

“[Exchange] makes us richer and makes our mind-set, our strategy to design and normally to life, rather more complicated and engaging and attention-grabbing and opens our view to the kind of sudden options which we will attempt to translate into our designs,” he stated.

The Dalmore is a Scottish whiskey distillery primarily based in Alness. It was established in 1839.

V&A Dundee, Scotland’s first devoted design museum, opened on the waterfront of the River Tay in 2018. Dezeen filmed an unique video interview with Kuma to mark its opening. The museum has hosted various exhibitions and installations, together with a vibrant maze designed by Yinka Ilori.

This speak was filmed by Dezeen for The Dalmore as a part of a partnership. Discover out extra about Dezeen’s partnership content material right here.