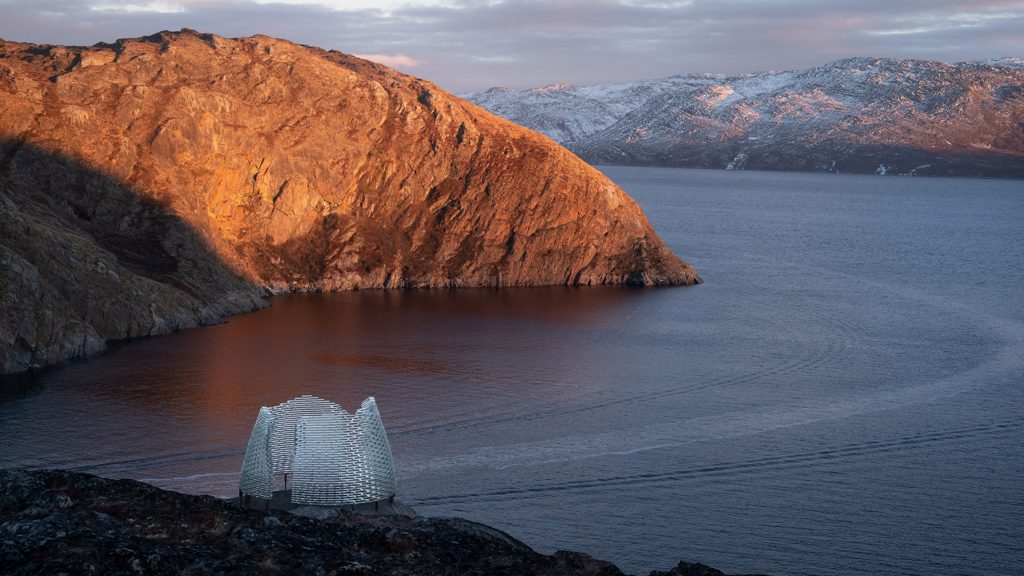 Swedish structure studio Konstantin Arkitekter has created a pavilion in Greenland named Qaammat, which is made up of two glass block partitions perched on the rocky terrain of a UNESCO World Heritage website.

Situated on a mountaineering path within the municipality of Sarfannguit, Konstantin Arkitekter founder Konstantin Ikonomidis designed the construction as a landmark and gathering level that promotes the native tradition and heritage.

The design references a Greenlandic inussuk – a construction sometimes made out of stone that’s utilized by Inuit communities to navigate and mark journey routes.

Ikonomidis labored with the Inuit neighborhood in Sarfannguit and the native UNESCO workforce to find out the situation of the pavilion to be able to create a construction that celebrates the pure setting and cultural heritage of the positioning.

“In the course of the survey’s early phases, I had quite a few conversations with the village chairman, Aron Olsen, who shared tales and Greenlandic legends which can be strongly associated to the locals’ bond with nature,” Ikonomidis informed Dezeen.

“Primarily based on this, I tried to assemble a sense of environment in a fictitious geometry which may convey a sensation of thriller as I comprehended his tales, and selected to work with glass to translate the reflection of the immense sense of energy on this pure panorama, that additionally reminds us of nature’s vulnerability,” he defined.

Qaammat’s translucent, curved partitions, which have been constructed from roughly 1,200 glass blocks glued collectively in a brick sample, create a blurred perspective of the encompassing panorama.

Two slender openings between the partitions create a linear path within the pavilion and information guests to a viewpoint overlooking a physique of water.

“The glass absorbs and fluctuates gentle, and seen from a distance, it displays the colors of the environment, the seasons, the passing of time,” stated IIkonomidis.

“The Qaammat pavilion can concurrently alter the viewer’s perspective, merge, and even vanish into the encompassing topography.”

“The pavilion is designed as a poetic and aesthetic object, however most significantly as a symbolic gesture, acknowledging the pure website and wealthy historical past, the distinctiveness of the Greenlandic tradition, and the religious sensibilities rooted in Sarfannguit,” IIkonomidis continued.

The pavilion is anchored to the rocky terrain by drilling holes into the bottom and putting in submit anchors – a technique that can also be used to assemble homes within the space.

A round metal bracket acts as the bottom for the glass blocks. It’s mounted atop poles that fluctuate in size to counteract the uneven floor.

The poles and anchors utilized in Qaammat’s construction have been custom-made by scaling up commonplace 15-millimetre parts utilized in native building to 40 millimetres to be able to maintain nearly five-tonnes of glass blocks.

Settled alongside the south department of the Arctic Circle Path – a preferred seven-day mountaineering route – the Qaammat pavilion directs hikers alongside the trail and acts as a begin or end marker for shorter trails.

Additionally it is used as a gathering place for guests, native residents and faculties, and will be seen from passing boats to point Sarfannguit’s location.

The challenge has been shortlisted within the set up design class of Dezeen Awards 2022, alongside an set up in Belgium that explores financial and ecological justice and a sculpture of a purple home partially submerged within the River Avon in Tub.

The images is by Julien Lanoo.